When burglars broke into Angel Di Maria’s Prestbury home on January 31st they didn’t steal anything tangible but they left with Di Maria’s spirit. Who knows what really happened that night but the writing has been on the wall ever since. It was devastating enough to frighten his wife and put the Di Maria’s off Manchester for good. Three masked men and scaffolding as crow bars? One can only have sympathy and understanding for a family who underwent that type of assault. 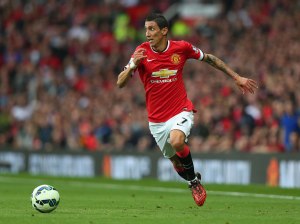 As of writing it seems certain Di Maria will sign for PSG. In the Manchester Evening News Samuel Luckhurst argues that Louis Van Gaal contributed to Di Maria’s failure and probable departure by playing him out of position. I disagree. Great players can play anywhere. Talent and courage always shine through. You could put Messi at right back; Ronaldo at center half, or Jaap Stam at outside left and they would do fine. You would know they were committed and trying their best. Look at Falcao and the fan generosity he inspired by simply trying. Not so with Di Maria. We all knew instinctively he wanted out. The burglars won. Since that January encounter all enjoyment and impudence disappeared from Di Maria’s game.

But what does Van Gall do now? You only have to listen to the manager on Sky Sports to know he understands the task at hand. He wants pace and ingenuity. A scalpel to open the tightest defence. A Robben, a Hazard, a Ronaldo. Di Maria was supposed to be that player.

I’m a huge fan of Van Gaal’s press conferences. The slightly crumpled detective schtick is wonderful. He actually tells it like it is: “We are in a transfer process”; “I want to sign a superstar”. What more can he say? You know Woodward is knocking on Real Madrid’s door for Ronaldo. Who else is there? Reuss? Is he available?  Muller? Will Bayern sell another? Bale? Is he the piece in the De Gea puzzle? The questions are endless. The answer is the same. Van Gaal knows what’s missing he’s told us. A player with pace, power and control. A dagger in the final third.

So far United have had a brilliantly successful transfer window. Darmian looks a fixture for years to come. Schneiderlin could be terrific. The only question against Schweinsteiger is how many games can he play. De Pay has a lot to learn and isn’t the finished article yet but the promise is enormous. The missing man however is the key.

Some final thoughts. I went to the game in Seattle, watched San Jose on United’s in house channel, and the Barcelona game on US network TV. The United roadshow is something to watch. Technology, meets marketing, meets social media. No wonder Ed Woodward and his team pay attention to the fan blogs and Twitter. The fans continuously build and extend the brand. In- depth analysis like this excellent piece from United Rant. The season preview from Republik of Mancunia. There’s just so much stuff. The guys at Full Time Devils who created their own TV channel are following the team across America.

Last of all, in 1920 Hollywood superstars Charlie Chaplin, Douglas Fairbanks, Mary Pickford, and a couple more banded together to create the United Artists studio. It’s a great name. I’m launching a Twitter campaign to replace Galactico with  #unitedartists. Now all Louis and Ed have to do is deliver one.