Hands up if a month ago you had never heard of Anthony Martial? I hadn’t.

Hands up if a month ago you believed David De Gea was finally on his way to Real Madrid. I did. 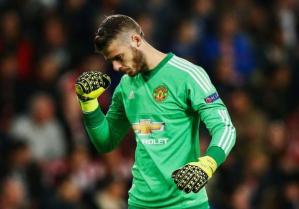 Hands up if you thought United would be second after six matches? I thought they would be third.

All in all a very good day on the south coast after a very pedestrian half hour and Southampton’s well worked opener.  Cue Rio the match summariser:

Almost 20mins gone….Southampton players not having to break sweat here…

As we know things soon got a lot better thanks to Martial who after rudely interrupting Southampton’s dominance then had a Roy of the Rovers moment when he forgot about running at and behind Southampton’s defence to help out Virgil Can Dijk with his cramp. It was a wonderful gesture, “i’m sorry I’ve run you ragged” and a spectacular first full start in the league.

Martial is beginning to resemble a steal.

The third goal was brilliant, 45 passes, count them 45 -take that Barcelona and Arsenal –  revolving around a fulcrum of Schweinsteiger, Rooney and Mata whose eventual finish was superb. I tried to find a good YouTube of the goal but there isn’t one there yet. If anyone finds the full clip with all the passes please send it my way.

So here we are. A labored first half of the first half. An eruption of pace, invention and possession, then a nervy few moments. At the end without De Gea’s brilliance the game is a draw and maybe even lost. Get that hanky out Florentino

Florentino Perez, watching at home, swallows a sob & then looks accusingly at his wireless broadband router in the corner of the room

How many more points would @manutd have had if @D_DeGea had started the season!?

De Gea was the signing of the season.

United now sit second but there is a tough set of fixtures on the way.

Van Gaal, meanwhile, is treating us all to Veteran Coach Psychology 101. On the one hand he points to Memphis/Depay, Martial, and Shaw, as “building for my successor”. He lays out a vision of a Busby/Ferguson future dynasty built on very expensive youth, but then as he did after today’s game he’s quite capable of concentrating on the now:

“We have made a statement that we shall compete for the title,” Van Gaal said.

“You cannot expect a title from a team in transition. But when we are close we shall grab it.”

To me that reads like the truth. He knows what he has, and he’s telling us don’t expect too much. When he points to the future there are those who accuse him of absolving himself of responsibility by preparing the fans that it will take time to restore United’s dominance. Yes we all want “our title back”  but maybe the Practical Philosopher in Van Gaal is correct. Nervy wins on the back of goalie heroics and 19 year old debutant centre forwards thrilling promise may not encourage title dreams yet. But for me 45 pass created goals do.

One final note about Luke Shaw. This was a great touch on Instagram even if the cynical old hack in me thinks United’s PR department probably “helped” with the image: