Watching Van Gaal walk slowly down the touchline after the game you got the feeling that here was a man who knew two points had slipped away and can’t wait to get the check book out again. 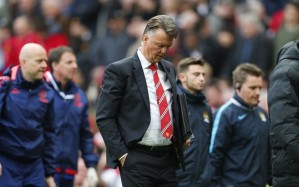 United are solid at the back and in midfield, but as we all know it’s the final third where the magic is missing. Martial is terrific but he needs help. In my opinion Rooney can still contribute, but another forward of proven pace and danger is obviously needed. The clamor to remove Rooney is deafening. After yesterday the Republik of Mancunia let his stats make the point. They weren’t good. His passing was poor, and he had no shots on target. But he is being asked to play a very hard role and he too needs support. Better players are needed. But can you make them available in January? First United have to qualify for the next round of the Champions League. Then the balancing act is if a proven striker is available whose team is out of the Champions league but could contribute to the League and Cup campaigns, do you get that player and another centre half? Or do you try and buy someone who contributes in all competitions?

It shows how tough it is to rebuild and take United to the next level. There are some good players in the current team. Smalling, Jones, Rojo, Schneiderlin, Schweinsteiger and Martial were excellent on Sunday and afterwards Van Gaal’s verdict was measured:

I am very proud of my players because I think we played 90 minutes of a tough game. Both sides played a very tactical game. It was very compact and organised, that is how Manchester City played against us. They adapted the line-up against us.

“Against Sevilla in the Champions League, they played with two strikers and now they played with one, with one more player in midfield,so it was a tough game. We created more chances but we didn’t finish them and that is the disappointment because you must win these kinds of games for the fans. It is the derby and when you are so focused and so concentrated like we were today then, yeah, you deserve to win. But sometimes you don’t get what you deserve.”

For me the match felt it was played by two teams tired by playing in Europe. United’s squad is thin. I’ve been saying since August Memphis/Depay is a bust and with Shaw out and Lingard still learning, that leaves Darmian, Blind, Young, Valencia and Romero as the frontline squad players. City were without Aguero and Silva, yet apart from Martial Sunday’s game lacked craft and penetration where it mattered. De Gea didn’t have a meaningful save to make, Hart made one rush off his line to deprive Mata and a good save from Smalling at the death. There was almost half a billion pounds in transfer fees on the pitch and both sides were laboured.

I’m sure United are working hard in the background to do something in January.