If you’re looking for the blog that bashes Van Gaal and United stop reading.

“Boring” says Paul Scholes. “Won’t win a trophy this season…and Paul Scholes Is right” says the Telegraph’s deputy head football writer Jason Burt, who also says Scholes is a season ticket holder at Old Trafford. (Personally I don’t think one of the team’s best ever players who made 499 senior appearances buys a season ticket, but that’s another matter -someone can correct me if I’m wrong?). “Uninspiring garbage” says my former colleague Garth Crooks. Ultra cautious Van Gaal “must listen to the fans”  who chant “attack, attack, attack” says the United Rant.

Here’s the league table from exactly a year ago. United had just lost 1-0 to City.

Tenth with 13 points from 10 games and 13 points behind league leading Chelsea. Now United are 4th, having played one more game than at this time last year but with 21 points and are 5 points behind City and Arsenal.

Then there the other stats which claim Sky Sports reinforce the United are boring clamour: 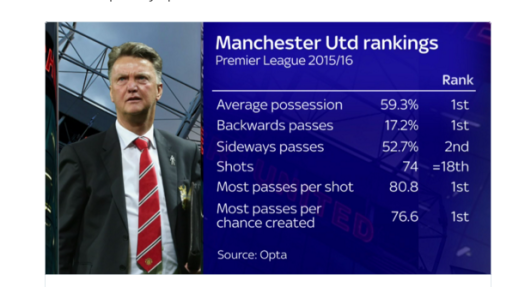 It’s probably fairly obvious where I stand. First of all you have to build a platform. Then depending upon luck in the transfer market, a few youth players coming through, and some good management, you can win something. I’m not going to lecture for patience or point to the flak taken by Mourinho, Wenger or Pellegrini, as examples of how fickle media and fans are, well I am –  but let’s take a breath here.

The home defeat by Boro was unfortunate. So was Herrera’s fluffed chance in the first half against Palace. Three draws in a row isn’t the greatest. Pundits pundit, and get paid a bundle for doing it. Fans quite rightly want their title and swashbuckling football back. But a 61% improvement in real terms isn’t bad.

PS Paul Scholes is as big a fan as all of us.