Another match winning performance from De Gea; another good game from Smalling; and apparently another Paul Scholes too slow barb from Van Gaal’s favorite TV pundit. The Scholes’ remarks are reported in the Mirror. I don’t know the context but let’s face it: Scholes on TV + United  + Van Gaal = never let the facts spoil the opportunity for some controversy.

It was a deserved win. Memphis Depay’s opening goal was terrific. Great pass, great volley and then United deserve credit for immediately hitting back after Watford’s penalty equaliser. It was as if they heard whatever Scholes was saying on TV, because they immediately upped the tempo to overwhelm Watford and force Deeney’s own goal. 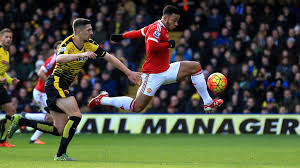 Now the worry is injuries. Hererra’s tweaked hamstring and Jones twisted  ankle are unfortunate. Martial and Rooney are expected back for Wednesday’s Champions League game against PSV, but there are questions about Fellaini and Carrick and of course Shaw and Valencia are out for months.

For me this is where Van Gaal’s insistence on organization and stability pays off. Forget the criticisms about ponderous play. It’s the solid, well-coached foundation which has United in second place in the league, and which also provides the ability to cope with injuries. Players know what they have to do and how they have to play. Young at right back? A fluid front three of Memphis, Lingard and Mata? in other words Van Gaal’s process and dare we say it “philosophy” is obviously working.

After PSV it’s something probably no one expected to hear, write or say – a  table topping match up at Leicester City. It’s currently a very interesting Premiere League. With City and Arsenal’s wobble today, Liverpool and Tottenham’s resurgence, and Chelsea bound to find some form at some point, the league remains wide open. United have a reasonable month of fixtures ahead. A bit of luck with the injuries. A couple of players arriving in January. Who knows what might happen? Just saying.