You have to feel for the supporters who travelled all the way to Midtjylland, paid 71 pounds for a seat and then had the privilege of finding out that the old scribbler Shakespeare nailed it all those centuries ago. Something was “rotten in the state of Denmark.” United had no confidence, no cohesion and no spirit. No wonder the fans chanted ‘We’re f***ing s**t’.

The players and staff looked shellshocked at the performance,  particularly Van Gaal. 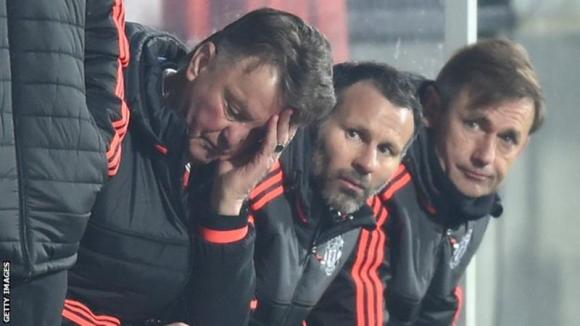 Admittedly the club is going through the worst injury crisis in years, but tonight was terrible.

Shrewsbury are next, then Midtjylland again, then Arsenal. In three games the season could be well and truly over. Out of both cup competitions and out of the 4th place league contention. If Van Gaal survives the only thing that will save him is winning the Cup games and at least a draw against Arsenal. Who would bet on any of those outcomes?

The Manchester Evening News is calling for Van Gaal’s head, and Mourinho is waiting in the wings. Yet if Mourinho is appointed this week or next it will be his most difficult job in football. This squad is already thin, now it’s demoralized as well as depleted. Losing to Sunderland, losing Rooney for at least six weeks, De Gea hurt in a warm up, plus all the other injuries. It’s payback time for all the year’s of success. Cursed.

Van Gaal deserves sympathy. Nothing is going right for him.