If Sir Alex Ferguson smiles broadly at the end of a game, claps and sings along with “Glory, Glory, Man United”  you know United have produced a landmark performance.

Today’s win was probably the most pulsating, energized football seen at Old Trafford since the old boy retired, and it’s hard to think of a Manchester United teenager who’s had as much impact in his first two games as Marcus Rashford. Four goals and an assist in those two games keep all sort of hopes alive. It’s easy to go ga ga over Rashford.  After the game both managers were:

I could imagine what he did in the first game because he is a striker so he is coming into the situation to score goals.

The first match is always good because he can do the things that he thinks he wants to do, but in the second match he has to do what the manager wants him to do and he did it fantastically.

I think his performance was better than the first match. Normally the first matches a debutant plays are good, but it is the consistency – he has to show it in the third, fourth, fifth match. But what he showed in his second match is special, I think.”

Arsene Wenger: ” The player who was surprising for me talent-wise was Rashford because of the timing of his movement and his intelligence.

‘His movement in the box was great and he could be a very positive surprise for Manchester United on what I’ve seen today.’

The pinch of salt is Rashford was replaced after 80 minutes today by Adnan Januzaj, who two years after he was was the subject of an international tug of war for his services, and a  huge bid from PSG, is proof that football can be the most unforgiving of games. As the United Rant points out Januzaj was “the boy who could do anything”.

Arsenal were well beaten today. After the stultifying, dull and ponderous fare of many of this season’s games, we watched youth and verve assert United’s traditions. Memphis made life very difficult for one of the league’s best right backs. Mata had strikers making forward runs and players to pass to. Schneiderlin shut down Arsenal’s passing lanes, and Blind proved yet again how valuable he is. Everyone did their part and 18 years old Tim Fosu-Mensah, who is the 31st player used by Van Gaal this season, did enough to justify all the rave reviews coming our of Carrington.

Van Gaal has argued all season that he carries a small squad because it removes the obstacles from giving young players a chance. That’s been a dangerous game to play with up to 15 players out injured, but today justified his argument. Has he regained the fan’s trust? 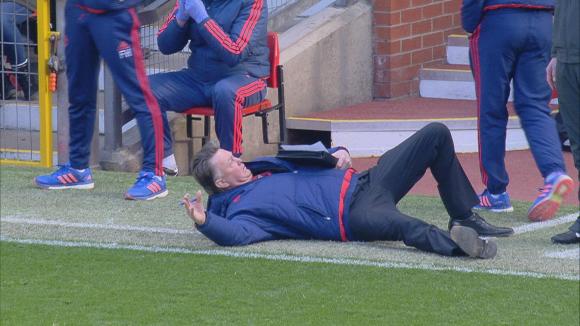 The Stretford End sang his praise after his comedic turn of the season when he collapsed in front of the 4th official to protest Alex Sanchez’s diving antics. Will those same fans be singing his praises next season? Obviously we won’t know for a few weeks yet, but today must have gone a long way to restoring both the board and fan’s trust in the manager.