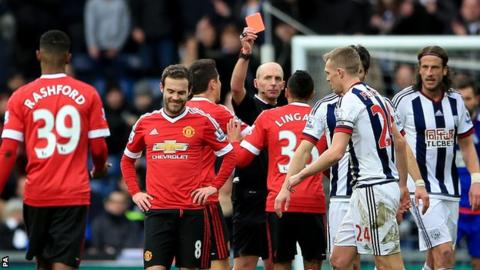 It’s not like him, but it was dumb and when he writes his weekly blog Juan Mata will be the first to admit it (which he does). Who knows if United would have won without him but once Mata was sent off United never looked like getting anything out of the game. Earlier Liverpool got lucky after being a man down to win with that last second no-penalty, and yesterday Arsenal battled all the way for a draw, but United never got going.

In the chase for the 4th spot the eventual price of the red card, could be very, very costly. It was Mata’s first ever red and Van Gaal defended his player.

“What can I say when you send off a player like Mata? I have asked him if it’s his first red card and he said yes.

“When you give the first and second yellow within minutes, you can do it according the rules, but I think the referee has to know the person doing it.

“I don’t think Mata has ever had bad tackles and something like that. Most referees show that [discretion].

“You know the first one is a stupid yellow card and then you have to be aware the referee can give a second yellow card.

“A referee has to decide within one second but when you know the player, Mata never hurts a player.

Van Gaal now has to pick the team up before Liverpool in the Europa Cup on Thursday, West Ham in the FA Cup next Sunday, Liverpool again in the return Europa leg and City in the league the following Sunday. Mata is suspended against West Ham.

Even before today every game until the end of the season was a cup final. A loss doesn’t change that. Realistically United can lose one more match in the league and maybe draw another, away games at City and Tottenham emphasize the scale of the task.

Meanwhile Sunday’s papers carried speculation that Mourinho believes Ryan Giggs is the next United manager. It’s a gamble for the club, but in the end if United believe in the current crop of kids it may be one worth taking.