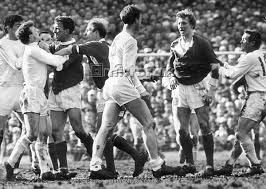 Way up in the stands last night was the these days cuddly, grand-fatherly, wise-cracking Pat Crerand. Make no mistake when Crerand played the game he was a hard man’s hard man.

Crerand brought Glaswegian toughness and a frightening presence to United’s great team of the 60’s. Inside and outside of the dressing room no-one messed with him. In the words of the writer Hugh McIlvanney:

” If he got mad you called the army.”

All United’s great teams had a core of steel. Players like Foulkes, Stiles, Law, Robson, Hughes, Bruce, Stam, Keane, Schmeichel, and Vidic might have finished on the losing side but the other team would have earned the win and had the bruises to prove it. As Keane said after last night: 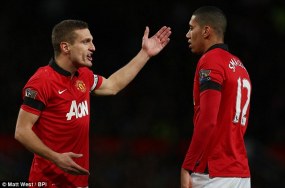 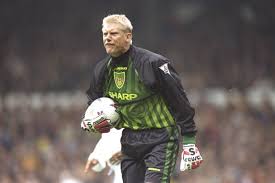 Roy Keane (left) of Man Utd and Arsenal’s Patrick Vieira come to blows. ARSENAL Vs MANCHESTER UNITED (1-2) FA Carling Premiership, Highbury, London. On 18 November 2005, Manchester United captain Roy Keane sensationally left Manchester United by mutual consent. A statement released by the Old Trafford outfit confirmed that their long-serving captain has departed with immediate effect after it became clear that his future at the club was untenable. 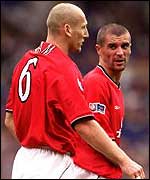 I’m not advocating that you kick, punch and intimidate your way to success, but this team desperately needs a couple of players who when necessary will stand up and be counted.

United were playing their bitter rivals. You would never have known it. No wonder Van Gaal wanted to sign Sergio Ramos last summer.