Curious few days when the football headlines are dominated by Chelsea’s doctor-dodging dictator as the Guardian labels Jose Mourinho. What’s Up Doc! Great stuff unless you’re a Chelsea supporter or a doctor only trying to do her job. It was irresistible to everyone, including me,

Meanwhile  I watched on an Iphone as United went to the top of the league with their solid but unspectacular display at Aston Villa. Two games, 6 points, no goals against, you cannot argue VanGaal is doing a great job. United have a shape.

The back four despite all the worries about the Smalling and Blind pairing played exceptionally well. As a unit they defended with calm efficiency. Villa never looked like scoring. There will be sterner tests to come but if Blind in particular continues to read, intercept and distribute as well as he’s doing, and Smalling deals with the more muscular and pacy threats, Van Gaal may have shown that yes, he does know more about the game and his players than we do. Schneiderlin is doing a brilliant job protecting the centre and Darmian and Shaw have been excellent.

It’s the last third where the pieces have yet to come together. For me the Guardian over analayzed Januzaz’s inclusion over Young. Van Gaal was proved right again as Januzaz scored the winner. Much of the pre-season debate has been about will United give young players a chance to learn and grow. Villa away is the perfect opportunity.

However everybody recognizes there is something missing at the front. I felt sorry for Rooney. His touch was awful but let’s face it he was on his own without a lot of support and balls were being pinged at him from all over the place. The final third is where Van Gaal must be concentrating now. I think Mata should be the 10. He probes, he scores, he’s a wonderful footballer. Rooney historically takes time to get going but he’s still a great player. The pace is going to have to come from elsewhere.

There are more than two weeks left in the transfer window but the potential Pedro signing is now officially a melodrama.

There has to be something up if this move fails now. It can’t be the money. Maybe there’s another player out there who is more interesting to United?

In the meantime whatever happens at the Etihad on Sunday it promises to be a great weekend for United. If City win Chelsea will have 1 pt from two games. If Chelsea win that’s good. If it’s a draw that’s fine too.

Why Manchester United should pay 100 million pounds for Gareth Bale

In February 1979 I interviewed Nottingham Forest manager Brian Clough for BBC’s Football Focus on why he made Trevor Francis Britain’s first ever million pound player. Cloughie’s reasoning was simple” Listen young man” he declared “If Trevor Francis scores the winning goal in the European Cup Final he’s paid the fee”. Three months later Francis delivered the European Cup to Nottingham with a header in first half injury time. It was the only goal in the game against Malmo.

A million pounds was a huge amount of money in those days but Cloughie didn’t even blink. He was a football genius who also understood football economics. You pay for success.  If Louis Van Gaal believes Gareth Bale can win a Champions League title he should persuade United’s board to pay what seems like an astronomical 100 million pounds fee if necessary. Thirty six years ago Brian Clough proved it works. 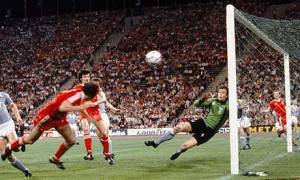 When burglars broke into Angel Di Maria’s Prestbury home on January 31st they didn’t steal anything tangible but they left with Di Maria’s spirit. Who knows what really happened that night but the writing has been on the wall ever since. It was devastating enough to frighten his wife and put the Di Maria’s off Manchester for good. Three masked men and scaffolding as crow bars? One can only have sympathy and understanding for a family who underwent that type of assault.

As of writing it seems certain Di Maria will sign for PSG. In the Manchester Evening News Samuel Luckhurst argues that Louis Van Gaal contributed to Di Maria’s failure and probable departure by playing him out of position. I disagree. Great players can play anywhere. Talent and courage always shine through. You could put Messi at right back; Ronaldo at center half, or Jaap Stam at outside left and they would do fine. You would know they were committed and trying their best. Look at Falcao and the fan generosity he inspired by simply trying. Not so with Di Maria. We all knew instinctively he wanted out. The burglars won. Since that January encounter all enjoyment and impudence disappeared from Di Maria’s game.

But what does Van Gall do now? You only have to listen to the manager on Sky Sports to know he understands the task at hand. He wants pace and ingenuity. A scalpel to open the tightest defence. A Robben, a Hazard, a Ronaldo. Di Maria was supposed to be that player.

I’m a huge fan of Van Gaal’s press conferences. The slightly crumpled detective schtick is wonderful. He actually tells it like it is: “We are in a transfer process”; “I want to sign a superstar”. What more can he say? You know Woodward is knocking on Real Madrid’s door for Ronaldo. Who else is there? Reuss? Is he available?  Muller? Will Bayern sell another? Bale? Is he the piece in the De Gea puzzle? The questions are endless. The answer is the same. Van Gaal knows what’s missing he’s told us. A player with pace, power and control. A dagger in the final third.

So far United have had a brilliantly successful transfer window. Darmian looks a fixture for years to come. Schneiderlin could be terrific. The only question against Schweinsteiger is how many games can he play. De Pay has a lot to learn and isn’t the finished article yet but the promise is enormous. The missing man however is the key.

Some final thoughts. I went to the game in Seattle, watched San Jose on United’s in house channel, and the Barcelona game on US network TV. The United roadshow is something to watch. Technology, meets marketing, meets social media. No wonder Ed Woodward and his team pay attention to the fan blogs and Twitter. The fans continuously build and extend the brand. In- depth analysis like this excellent piece from United Rant. The season preview from Republik of Mancunia. There’s just so much stuff. The guys at Full Time Devils who created their own TV channel are following the team across America.

Last of all, in 1920 Hollywood superstars Charlie Chaplin, Douglas Fairbanks, Mary Pickford, and a couple more banded together to create the United Artists studio. It’s a great name. I’m launching a Twitter campaign to replace Galactico with  #unitedartists. Now all Louis and Ed have to do is deliver one.