Derby County 1, Man United 3, January 29th: One for the fans, and why is Louis having a war with the Press?

For a moment forget the Louis Van Gaal Louis Van Gone drama and his current war with the Press. Watching the FA Cup win at Derby once again underlined something wonderful and worth celebrating. The hard core, real Man United supporters. The people who travel to support.  Look at them:

No wonder the United players joined in at Liverpool.

Louis understands the bond and the responsibility the fans. It’s why he always signs autographs and why he’s never afraid to acknowledge they deserve to boo, or come up with signs like this. 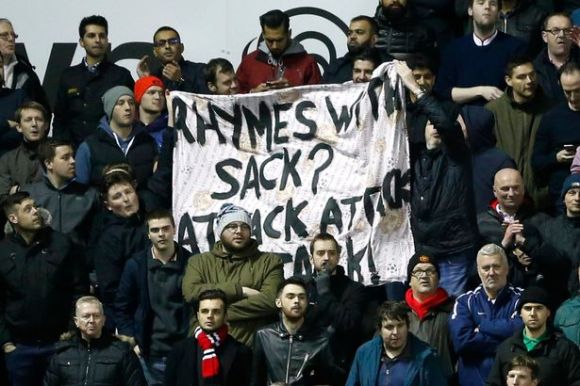 At Derby the players listened. There’s no doubt they are playing for Van Gaal. We know the mix isn’t right, even though Rooney is returning to form and Martial delivered another performance illustrating why he’s going to be a superstar. But Van Gaal is correct when he says that mix can only be improved by the “process”. Meaning shrewd acquisitions, a commitment to youth, and forgetting the screaming headlines of doom and disaster.

The Manchester Evening News has four reporters covering United. The paper and those reporters obviously don’t have a relationship with the club anymore. It has succumbed to today’s demands. If United are big business how big is the media? The MEN and all the other outlets chase each other and the internet traffic that drives the simple equation: Eyeballs = ads, = revenue.

Then there’s us. The bloggers, the Twitterati, The Facebook pagers, and the commenters. Everybody has a megaphone. Look at a past few headlines on the United Rant.

Five Ways Louis Van Gaal can save his job

Full disclosure every time I link to the United Rant my traffic on this blog goes up. Some of you visit here after seeing a snippet there.

I can understand why Louis gets exasperated and hits back at the media. Who wouldn’t? Yes he earns a fortune and is answerable to the supporters. That’s a given. But with all of his experience you would think he would know better? As a friend texted this week:

Better to be like hound dog Pellegrini…who sends them to sleep and when they wake up they realize he’s said sod all.

The Press and us are lucky with Louis. He’s good value. He tells it like it is, even if he walks out.

Now for Stoke and Mark Hughes’ return. A big test for Borthwick-Jackson and possibly Varela. Stoke are physical, and in Artonauvic and Walters have forwards who can bully defenders. But Stoke were beaten today at Palace, and had a hard game Tuesday losing to Liverpool in the League Cup on penalties in extra time. Shawcross is out and United couldn’t be getting them at a better time.

Meanwhile no news on the transfer front. For me whether a player or players  are signed by Tuesday goes down to the wire. It’s not a question of need but availability.

Solid victory over Ipswich. Pereira a boost. Schweinsteiger’s influence grows by the game. Now for Sunderland at home on Saturday.

Due to the long term loss of Luke Shaw, Marcos Rojo’s short term hamstring knicknack and Paddy McNair’s injury, Van Gaal must reorganize again at the back. Every team has to cope with injuries but Phil Jones is back in contention and there are other defensive combinations available.

Darmian can play left back. So can Young.

I keep Smalling and Blind together. As argued previously Blind complements Smalling and makes him more effective. Blind’s technique, defensive smarts and ability to pass the ball are a very valuable package. It’s fullback where he has to make decisions.

Sunderland are a poor team, so further up the field is this the opportunity to give Pereira a further test. Who knows maybe Van Gaal even has plans for James Wilson?

There’s a lot that can go wrong for City at Tottenham on Saturday, and a draw in the Arsenal Leicester game would also benefit United.  It’s after Saturday when it gets much, much tougher. For me October defines the season. 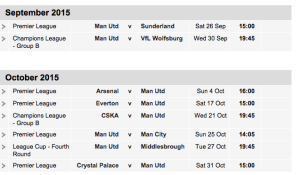 The Champions League fixtures are must win. Twelve league points are available from away games at Arsenal, Everton and Palace and of course City at home. It’s a serious test for the squad and the club’s ambition. Emerge out of October flying and who knows what may happen.

Schweinsteiger’s best game; Blind terrific; back four top notch; and what a debut for Martial?

Forget the first half. Liverpool parked the bus and arrived without invention or aggression, maybe because Coutinho and Henderson were missing? We watched a game marooned in the middle third and no one from United ran at Liverpool except Shaw. No frontline penetration, pace, or goals. A yawn fest.

So let’s concentrate on the second half.  If Memphis/DePay has pace or confidence he hasn’t shown it yet. I know I sound like a broken record but I’m beginning to wonder if he has it at this level. Louis Van Gaal has a major decision to make. Maybe Van Gaal gave it the old Busby and Ferguson “just go out there and express yourselves” at half time, but we all saw the immediate impact when Ashley Young replaced Memphis/Depay. Blind’s perfectly executed training ground free kick and Herrera’s “take that” penalty and United fans were a heck of a lot happier.

De Gea did his thing saving good efforts from Ings and Ibe, and even though Benteke’s brilliant overhead kick made for a few anxious moments United were much, much better.

Great win today for the lads. It's amazing what happens when we #Attack and go #Forward 😊 @ManUtd @ManUtd_SA @ManUtdUSA @ManUtd_ID

The icing on the cake was of course Anthony Martial’s debut goal. Kudos to the Twitter psychic who predicted it.

Martial on the bench, he'll come on and score in the 86th minute.

The early word on Martial was that he loves to drift left, cut in onto his right foot and drive at the heart of the defence. Job done, and a classic “allez vous faire foutre” (go fuck yourself) to the Daily Mirror and the “What A Waste of Money” chorus.

Remember when @MirrorSport said Martial was a waste of money Scored against Liverpool on his debut… #MUFC pic.twitter.com/RWzJu8lV96

But let’s not get carried away. One brilliant goal doesn’t make a career. Remember Federico Macheda? Well he’s currently playing for Cardiff and is out for 10 weeks following back surgery.

All in all a very good day for Van Gaal. He can celebrate at Wings sitting in second place before focusing on Tuesday’s Champions League game at PSV. Rooney is expected to be out again so there are questions about the forward line. My bet is Fellaini starts again and I hope Young does too.