And Mourinho’s missing man is……?

Three losses on the trot. The knives are out. Rooney is the fall guy. Mourinho’s not far behind, and United are back to playing Van Gaal’s sideways football. Not a good week. Yet it’s only September as Mata pointed out on his blog, and only City who have real daylight between United and the rest of the chasing pack. Maybe that’s why it’s so painful? City are wonderful to watch. De Bruyne the mastermind of their quick, mobile, swarming play. Guardiola style at it’s best. Liverpool aren’t far behind. Meanwhile United’s giants lumber.

The ruthless side of Mourinho will surely be seen in the coming weeks.  The midfield has to have more dynamism and penetration. Pogba has to turn up. By the time the October crunch away fixtures against Chelsea and Liverpool arrive Mourinho has to find width, speed and a midfield combination that both protects and threatens. The key could be Mkhitaryan.

Surely there is a mix of pace, craft and steel in Mkhitaryan, Mata, Pogba, Lingard, Fellaini, Schneiderlin, and Carrick. When everyone is fit there’s just too many good players available. But it’s Mkhitaryan who is potentially the most interesting. The Czech Republic’s captain Suchy’s foul on the Armenian during the first match of the international break has had a significant impact on United. Mkhitaryan brings exactly the qualities of pace and imagination United need, and we haven’t seen the best of him yet.

The same can be said for Pogba. Underwhelming is too generous a word. We’ve witnessed flashes of brute force, power, and an occasional mazy run. But he aint no Zidane yet.

And what about the rest of the team? The criticism of Rooney is merciless. Yes he’s having a terrible time. However people are quick to forget there would be no FA Cup win without the driving run setting up Mata’s equaliser. The same determination created the winner at Hull. Yes he’s getting caught on the ball far too often. Yes the passes are less than pin point. And yes it maybe time to put him on the bench. But he’s not the reason United are misfiring. There’s no balance in the team.

Mourinho has the players. Perhaps some aren’t fit, but now is when a manager earns his corn. Unfortunately, for me anyway, Mourinho’s darker characteristics are showing. Blaming Luke Shaw publicly for the second goal at Watford isn’t exactly brilliant man management. Especially when Shaw is said to have had a reoccurrence of a long standing groin injury. Mourinho’s reputation for handling young or sensitive players is awful. Not exactly a nurterer our Jose.

Yet this is exactly a period when players need someone to lift them, and to make the best decisions for the team. If anyone needs to step up it’s the manager. Let’s see what the line up is against Leicester on Saturday.

A quick review of all the teams in the league shows none with as many starting big guys. West Brom has two at 6ft 5″ in Jonas Olsson and Gareth McAuley but after that the next tallest outfielders are Johnny Evans and Chris Brunt at 6ft 2″.  Arsenal have Mertesacker at 6ft 6” and Giroud at 6ft 4″. Stoke’s Arnautovic is 6ft 4″ and of course Crouch is 6ft 7, but these days he’s a reserve. City’s Vincent Kompany is 6ft 4″ then it’s John Stones at 6ft 2″. Chelsea’s Matic and Cahill are both 6ft 4″. Liverpool appear mere midgets. Their tallest player is Sturridge at 6ft 2″.

And now as the Guardian’s Daniel Taylor point out in his Southampton game match report plenty of teams are going to “feel the force”. 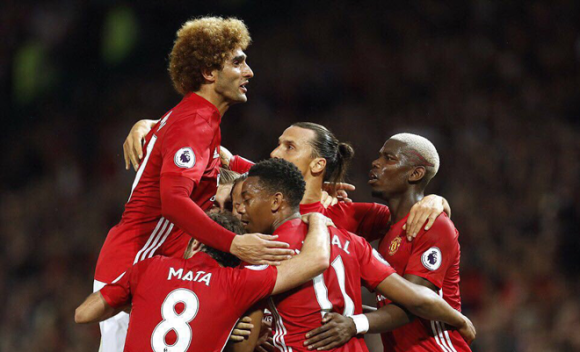 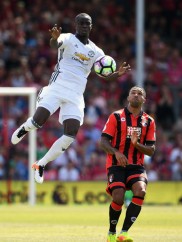 Bailly is overpowering attackers with his pace and strength. In contrast Fellaini has looked almost restrained. The wild man replaced by a calm, measured presence, tidying up in front of the back four. Who knew?

Mourinho’s teams have always had steel at their heart. Last season you always had the feeling other teams could bully United.

Bournemouth 1 Man United 3, August 14th: Solid start but there are a lot of interesting questions

Things couldn’t be going much better, an efficient, controlled, clinical performance at Bournemouth headlined by Zlatan’s goal, Bailly’s Man of The Match award, Blind’s calm assurance and a very impressive display from Fellaini. Top of the league and all that! 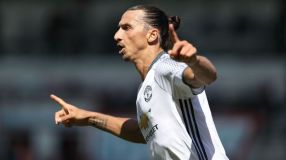 After the game Mourinho quite rightly pointed out he’s told the squad everyone will get minutes once September comes around and all competitions start. But that begs a lot of questions. Where does Pogba play? What will be the manager’s ultimate starting line-up? What will be the final squad?

With Lingard out Mourinho probably surprised everyone by starting Mata ahead of Mkhitaryan. Yet when everyone is fit or back from suspension, when the transfer window is closed and all the deals are completed, what team lines up to face City  on September 10th? Does Smalling walk right back into the team next Friday against Southampton? You would think so, but you can’t leave Bailly out and Blind has played well and provides a calm anchor. It also looks as if Fellaini is a Mourinho guy, forget the back pass against Leicester, in the first two games Fellaini has been everything you want in front of the back four.

Thanks to a relatively easy start and the successful transfer window United are in an enviable position. Everyone will be disappointed if going into the home game against City, there aren’t the maximum 9 points in the bank.

But which players does Mourinho trust to challenge Guardiola for Manchester’s bragging rights? Which players may have come and gone? There are some really tough decisions ahead. Do you sell Mata to raise money for Madrid’s Varane? Who makes way if Southampton’s Fonte is the option instead?

Mourinho likes to have a squad of 22 players including three goalkeepers, so if by September 1st that squad is:

Wow, and I mean wow.

As the question marks suggest I wouldn’t keep DePay, I’d sell him and buy a genuine jet heeled speedster. There are lots of twists and turns left before the City game. 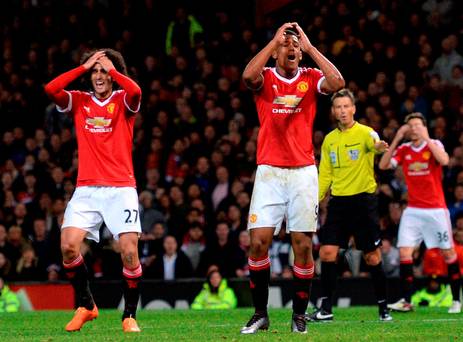 Remember the Four Tops hit? “It’s the same old song”?, well here we are again. The Stretford End boo birds and “attack, attack, attack” surfaced in the 70th minute, as for the third game in a row United’s patient – others say pedestrian, pedantic or boring football, and lack of finishing delivered a draw.

I must have watched a different game. C’mon it wasn’t that bad.  Fellaini hit the post and had one kicked off the line. Martial, Mata, Schweinsteiger and Lingard all missed chances. West Ham could have had 4 as the post saved United twice, De Gea outwitted Moses and Zarate missed a sitter.

The brief second half cameo from Memphis/DePay was the most positive, least fussy and direct performance I’ve seen from him this season.

United are in 4th but only three points off the top and with the same amount of points as City, who were well beaten at Stoke. By all accounts the 3-1 Arsenal home win over Sunderland flattered to deceive, Tottenham drew at WBA, and of course Chelsea’s defeat at home to Bournemouth  proves once again why this year’s league is to say the least unpredictable.

It’s a logjam up there and if United can open the check book in January they will not be far away. I’m sticking to my guns on that. The question is who can they get?

Cavani? Can he take the Premiere League’s physical side?

My guess is if someone comes it will be from Europe. But price shouldn’t even be a consideration. This January unlike others may be the time to buy because the league is wide open.

There’s no doubt there is tension behind the scenes at Old Trafford. The rumors and leaks of the players being unhappy with his methods, discipline, and organization are too frequent to ignore.

On Friday he said if he loses the dressing room he’s gone. That’s not an empty threat. He’s given himself his own walking papers at Bayern, Barcelona, Ajax, and AZ Alkmaar. In Aloysius Paulus Maria van Gaal’s world it’s always been “My Way or I pack my bags and drive off down the highway”.

Remember Alex Ferguson’s first two seasons at Old Trafford? You should. Van Gaal’s record is too good to throw away easily**** Update since this post was first written much has been written about how the Old Trafford hierarchy is  happy with Van Gaal and his methods, and are ready to sit down with him to discuss extending his contract. Good.

Now for Tuesday and Wolfsburg. Now that is a BIG game.

Even more on Fellaini and why he’s crucial this season

So the manager has clarified today that Fellaini will play more as a striker this season. In my book that’s a very, very good thing. I’ve already waxed lyrical on the qualities I believe he brings to the team, but to be honest it just makes sense. He’s a proven player in the final third. T 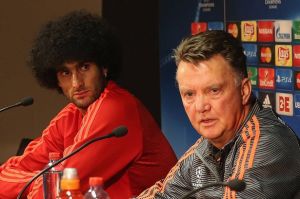 here aren’t many center halves who can handle him ask Kompany and Mangala. And as for the criticism on Twitter about how he turns United into a one dimensional pub team hoofing it forward in the hope of knock downs, that is utter bollocks. You get players wide or players who can directly attack in the final third and he will battle, pick up the bits, provide an assist or score. All of this “where is the swashbuckling team of old?” lament is utter tripe. Get real people. Once Ronaldo left United became a much more pedestrian and one paced team.

The last title was won on Van Persie’s goal scoring brilliance and some very, very dour performances. If you can’t sign Bale, Muller, or Reus, what are you supposed to do?

If Fellaini would have been available against Newcastle who knows he may have changed the result? I’m a fan. I think he changes things. There’s no one in the game who takes a ball on his chest in the box like he does. He’s great in the air. He’s mean. And he has a better touch than you think. I’d play him at centre forward and support him with pace on both sides. 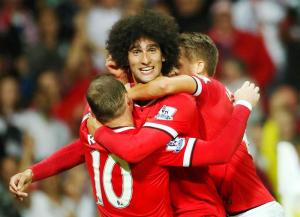